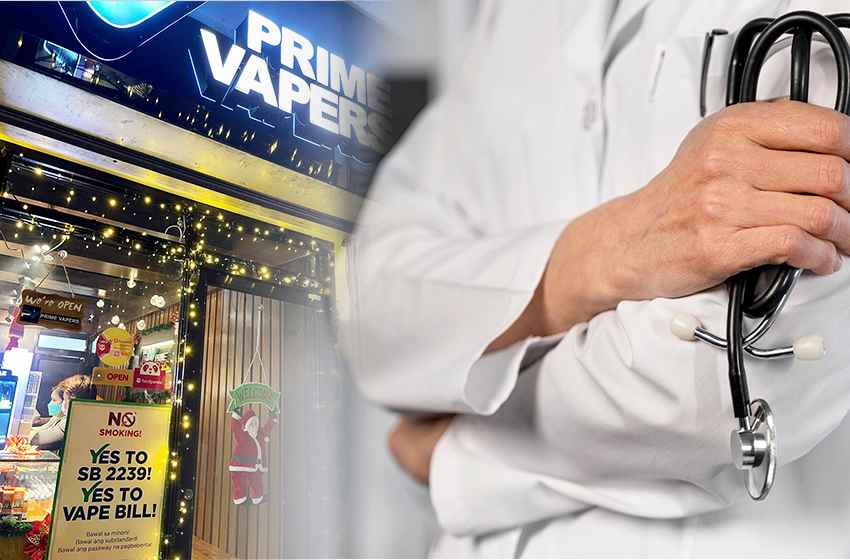 Vape shops express support for Senate Bill No. 2239 which aims to regulate the use of e-cigarettes and heated tobacco products in the Philippines.

Medical doctors joined consumer groups in expressing support for a Senate bill that aims to regulate the use of vaporized nicotine products such as e-cigarettes and heated tobacco products (HTPs) which were scientifically found to be less harmful alternatives to combustible cigarettes.

The Senate version or SB 2239 dedicates a third its provisions to ensure that minors will not have access to non-combustible alternatives and that only 18 years old and above are allowed to purchase and use them, the same age restriction imposed on cigarettes.

“Senate Bill No. 2239 and House Bill No. 9007, which aim to regulate nicotine products, should provide the needed controls, but they should not be more stringent than what is currently imposed on conventional cigarette products, or else the enacted laws could be self-defeating and may make inaccessible the pragmatic middle ground,” said Dr. Castillo.

Dr. Lorenzo Mata, president of the advocacy group Quit For Good and an occupational medicine specialist for over 35 years, said his group envisions a regulatory framework that incorporates harm reduction measures.

He said regulations for non-combustible alternatives should be “less restrictive than a combustible cigarette and supportive of reasonable accessibility while curbing unintended use of non-smokers and minors.”

Dr. Mata said laws should be “carefully calibrated to ensure that adult smokers are made aware of the less harmful alternatives available and given the option to shift to these alternatives while minors and non-smokers are protected. Over-regulating these better alternatives to the point of impossibility of compliance would only perpetuate smoking.”

Dr. Castillo said they support the use of HTPs in recalcitrant smokers and share the concern about its potential for abuse, especially by our youth. “This is where effective legislation can provide the necessary control measures. Not only the youth should be protected but even older nonsmoking adults, especially the women, who could be lured into the vice,” he said.

Dr. Castillo said the current decline in the number of smokers represents a mere 2.5-percent in the “past two years or 1,0250,000 less smokers per year. This may be a positive direction, but the number of smokers is not going down fast enough. We know there’s no quick fix to it, but a pragmatic and aggressive approach to the problem that shows some promise in mitigating the outcomes should be tried. The use of Alternative Tobacco Products and HTPs may be one such approach.”

He said that “permanent smoking cessation is still our main goal but as a mitigating measure, we allow our recalcitrant smoker patients to shift to HTPs as a relatively less harmful middle ground.”

“However, there’s a conscious effort to constantly remind them to give up smoking eventually,” he said.

Consumers and industry groups highlighted the overwhelming support that the vape bill is receiving from the estimated 1 million vapers nationwide, asserting their rights in the campaign “We vape, we vote.”.

Joey Dulay, president of the Philippine E-cigarette Industry Association (PECIA) said, “We’re seeing massive grassroots support for SB 2239 from vape shop owners and vapers both online and offline. Posters and stickers expressing support for the bill can be seen everywhere up to the Visayas region. As the deliberations in the Senate continues, we are seeing more organic posts from people using the #yestovapebill on social media.”

Anton Israel, president of Nicotine Consumers Union of the Philippines (NCUP), said, “Just check the Senate live streaming on the vape bill and the 90 percent of numerous comments and reactions are in support of the bill. The stakeholders’ clamor for a balanced regulation on e-cigarettes and HTPs reflects the people’s desire to have access to less harmful alternatives to smoking. There are around 17 million smokers in the Philippines, these are people whose lives will benefit once we have a risk proportionate regulation in place.”