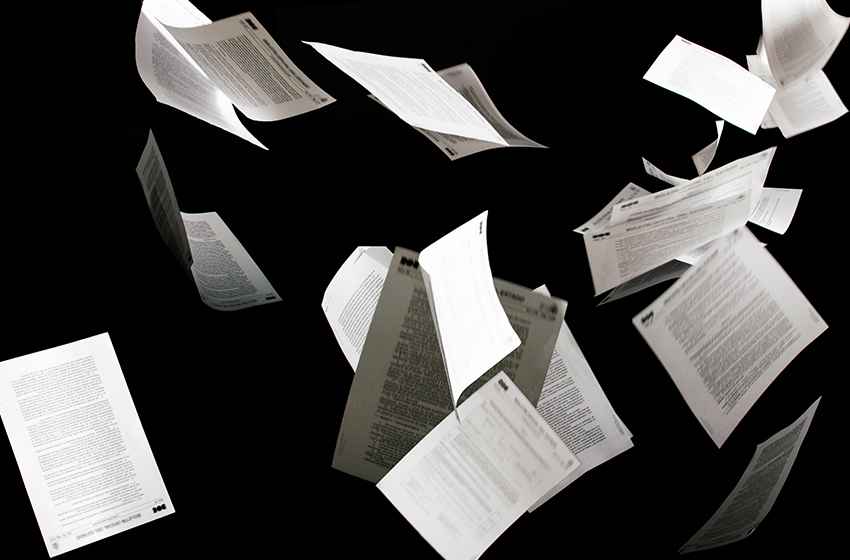 Filipino consumer groups asked their Congress to look into a report by an American think tank about Bloomberg Philanthropies’ repeated meddling in the affairs of low and middle-income countries (LMICs) including the Philippines.

The Nicotine Consumers Union of the Philippines (NCUP) and the Philippine E-cigarette Industry Association (PECIA) said the revelation made by U.S. think tank Competitive Enterprise Institute (CEI) about the intrusion by Bloomberg Philanthropies in the Philippines and other countries should serve as a wake-up call to the government.

Documents leaked to CEI described how Bloomberg’s Campaign for Tobacco-Free Kids (CTFK) influenced anti-tobacco policies around the world. In a blog titled “Exposed: Bloomberg’s Anti-Tobacco Meddling in Developing Countries” and posted on the website of CEI, Michelle Minton disclosed the content of the 128-page document of CTFK 2017 strategy for LMICs.  CTFK is funded by Bloomberg Philanthropies, the charity of financial billionaire Michael Bloomberg.

Minton said the leaked internal communications from CTFK “show the true extent of its influence, which reaches throughout all levels of civil society, media and even government, and appears aimed at imposing its will on the developing world, regardless of the needs and interests of the people who live there. Worse, it often provides funding to foreign government entities, seemingly without much regard for those governments’ level of respect for liberal values and democratic governance,” Minton said.

The documents cited specific cases of how Bloomberg and CTFK pushed anti-tobacco strategies in LMICs. In the Philippines, for example, the CTFK documents describe efforts “to file and push a smoke-free bill” aimed at blocking tobacco industry representatives from being part of the policy process, further noting that such a bill “has been drafted and will be filed as soon as the opportunity is ripe.”

“Taking advantage of the favorable political environment, we will promote the implementation of the EO after it is signed by the President.  We will also prepare to file and push a smoke-free bill to amend the smoke-free provisions of RA 9211 and preventing the tobacco industry from being a part of government efforts to implement the policy.  We will start advocating for higher tobacco taxes,” the leaked document read in part, detailing CTFK’s specific intent.

Philippine Congress recently concluded an investigation to determine whether the Food and Drug Administration (FDA) issue specific and pre-defined policies on e-cigarettes and heated tobacco products in exchange for funding from The Union, which is funded by the anti-tobacco organization Bloomberg Initiative.

Representative Jericho Nograles in one of the hearings revealed that several government agencies, including the FDA, Department of Health (DOH), Commission on Civil Service (CSC), Metro Manila Development Authority, have received a total of US$2.5M from The Union since 2009.

“There have been multiple instances wherein every time there is an anti-tobacco regulation that comes out of either the FDA or DOH, it coincides with grants coming from Bloomberg,” Nograles said.

Scrutinized during the hearing was the controversial Joint Memorandum Circular 2010-01 by the DOH and the CSC, which was cited as the basis for a draft regulation barring tobacco companies and other industries access to COVID-19 vaccine thru the governments tripartite agreement. The same circular was also cited as basis in refusing acceptance of the much-needed respirators donated by the tobacco industry.

CSC Commissioner Aileen Lourdes Lizada said she had moved to recall what she described as a “defective” JMC, noting that there was no record in the CSC that granted Duque authority to sign the JMC on behalf of the CSC which acts as a collegial body.

During the Senate hearing on National COVID-19 Vaccination Program, Senate Minority Leader Franklin Drilon questioned Duque about the JMC and asked to have it reviewed by the Department of Justice.

Drilon said Duque absolutely has no basis to refuse the donated respirators. “It is an overreach on the part of the DOH to reject such a donation simply because it came from a tobacco company. I do hope that this JMC is submitted and reviewed by DOJ,” Drilon said.

Reacting to Minton’s expose’, Anton Israel, president of the NCUP, said the document proved that “Bloomberg Philanthropies and the many organizations it is supporting have been funding government agencies in the country in exchange of anti-tobacco and anti-vaping policies and are depriving the rights of 16 million Filipino smokers and 1 million users of smoke-free nicotine products.”

“Worse, they make it appear that it is okay to influence national policies. But this meddling recently backfired when the Department of Health, in its eagerness to enforce Bloomberg’s policies, refused to use the life-saving respirators donated by tobacco companies at the height of the health crisis,” Israel said.

Joey Dulay, president of the PECIA, said that instead of relying on the advice of foreign NGOs, the government should listen to Filipino consumers who are directly affected by these policies. 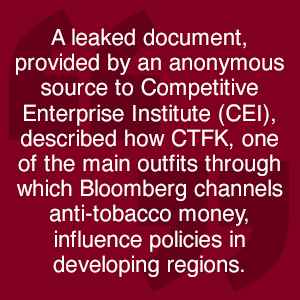 The document, provided by an anonymous source to CEI, described how CTFK, one of the main outfits through which Bloomberg channels anti-tobacco money, influence policies in developing regions.  CEI is a think tank fighting barriers to freedom, innovation, and prosperity.

“CTFK has endeavored to influence all levels of the political process and its key players in various countries. This includes partnerships and collaborations (often financial) with activists, think tanks, professional associations, media, universities, and governments. At the top, CTFK decides the priorities and the best course of action, while its grantees, sub-grantees, and ‘partners’ aid the effort by promulgating public endorsements, media coverage, supportive evidence, regulations, legislation, and discrediting of detractors,” Minton said.

“Viewed as a whole, however, the strategy of CTFK and the wider Bloomberg-funded anti-tobacco effort appears aimed at winning policy battles and passing laws with little consideration of whether they result in actual reductions in smoking or improvements in health,” Minton said.

Minton noted that in Turkey, a country cited as a success story for implementing all of the WHO’s tobacco policies, which CTFK advocates for around the world, adult smoking rates actually increased from 27 percent to over 31 percent between 2012 and 2018.

Minton said while there is evidence that alternative approaches work better for certain populations, these are vehemently rejected by the Bloomberg-funded anti-tobacco movement, who consistently ignore the successes of countries like Japan, where cigarette sales have dropped over 40 percent thanks to people switching to heat-not-burn tobacco products, and Sweden, which enjoys the lowest rates of smoking and lung cancer in the European Union as a result of its embrace of the use of non-combustible snus.

“Despite all this, CTFK and its allies in the global tobacco control movement continue to advocate for policies that have been shown to consistently backfire, without any apparent effort to course correct. More troublingly, perhaps, they also appear uninterested in how their approach to influencing LMICs may be harmful to the long-term welfare of the people who live there,” Minton said.

“The strategy may be effective for manipulating LMICs into adopting the tobacco policies Bloomberg and CTFK favor, but it may also be perpetuating or exacerbating the legacy of colonialism in the developing world,” said Minton.