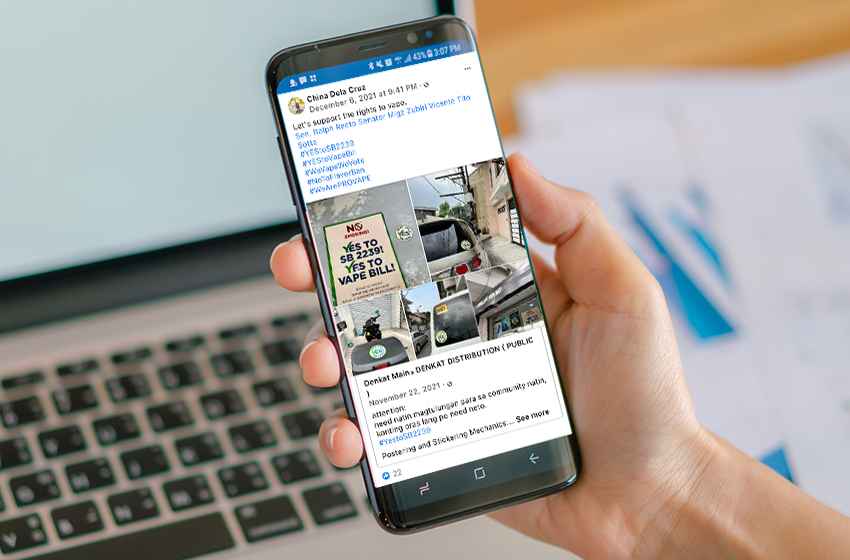 Consumer and harm reduction advocacy groups in the Philippines appealed to President Rodrigo Duterte to sign the Vape Bill into law after it was overwhelmingly approved by the Senate and the House of Representatives to provide more than 16 million Filipino smokers less harmful alternatives that will help them quit.

In their letter to President Duterte, the groups, representing over 16 million Filipino smokers and a million vapers, said the Vaporized Nicotine Products Bill, once signed into law, will regulate e-cigarettes, heated tobacco products and other vaporized nicotine products while ensuring that they contribute to government revenues.

“In passing the Vape Bill, the lives of 16 million Filipino smokers will be saved because legitimate alternative products will be allowed to be sold to smokers who want to stop smoking.  The Vape Bill will also put an end to the sale of unregulated and illegal products that do not pay excise taxes to the government,” according to the groups which launched the successful viral campaign, “We Vape, We Vote!”.

“With the growing positive scientific evidence coupled with our life-changing experiences, our resolve is stronger that vaping saves lives! We earnestly hope you would consider our humble plea Mr. President and sign the Vape Bill into law,” the groups said.

Congress is expected to hold a Bicameral Conference Committee this month to reconcile the Senate and Lower House’s versions of the bill. The version passed by the committee and ratified by the two chambers will be sent to the President for his approval and signature.

Intended to help adult smokers quit cigarettes, the bill has strong measures to protect minors from accessing and consuming the device.

“We support the reasonable and science-based regulations mandated by the Vape Bill to ensure that adult smokers stop smoking using a safer alternative. Contrary to the fake news being spread by some sectors, the Vape Bill contains many provisions meant to protect the youth so they will not have access to these products,” the groups said in the letter.

The Vape Bill bans the sale to and use by minors of vape products, and the sale, advertising and promotion of vape products within 100 meters of school perimeter and playground. Use of flavor descriptors that unduly appeal to minors in vape products and the display of vape products immediately next to products of particular interest to minors are prohibited. Persons who violate these provisions will be penalized with a fine or imprisonment.

The groups said that by passing the Vape Bill, the Philippines will join the growing list of progressive countries that believe in providing less harmful alternatives to their smoker population who don’t want to stop smoking.

“Our country will join the ranks of the European Union, the United Kingdom, the United States, New Zealand, Italy, Bulgaria, Cyprus, Norway, Greece, Portugal, Switzerland, Egypt, and Uruguay, among many others that believe in providing smokers with alternative products to save their lives. The experience of these countries will show that allowing alternative products has led to a significant drop in smoking rates with no effect at all on drug use or alcoholism.

The groups also noted that the Vape Bill will prevent the sale of unregulated and illegal products.  They said, it is not vaping per se that causes e-cigarette or Vaping Use-Associated Lung Injury (EVALI) but adding vitamin e acetate in vapor products which will be addressed by the Vape Bill.

“Even the US CDC stated that smokers who have quit smoking and used vapor products should not go back to smoking and should switch completely to vaping,” they said.