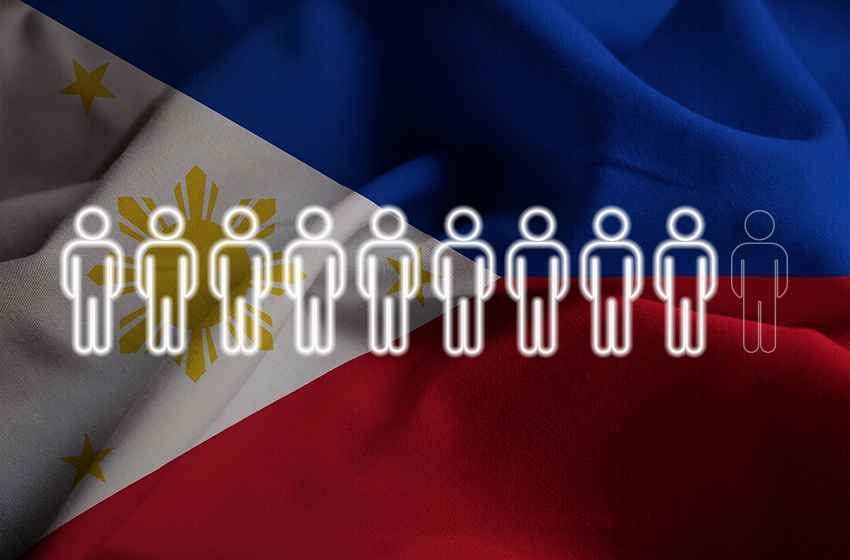 Nine of ten Filipino smokers believe that the government should pass laws to encourage them to switch to less harmful alternatives to cigarettes, according to a survey recently conducted by an Asian research network. 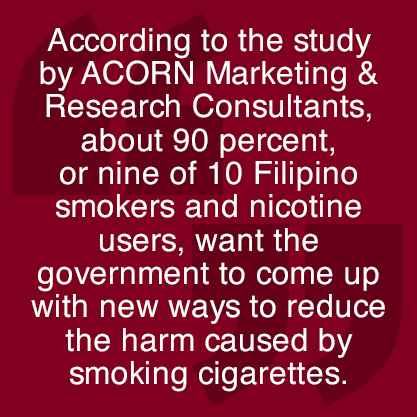 The study, conducted by ACORN Marketing & Research Consultants and commissioned by consumer advocacy group Vapers PH, reveals that 94 percent of 2,000 respondents agree that the government should enact policies to encourage adult smokers to switch to less harmful alternatives to cigarettes, while also ensuring these products are not used by the youth or those below 18 years.

ACORN is the largest independent Asian research network with full-service offices in 11 Asian countries, including the Philippines.  It conducted the survey about the attitudes of Filipino tobacco and nicotine consumers from August 3 to 15, 2021, with a sample size of 2,000 legal-age smokers (above 18) and vapers (above 21) nationwide.

Results of the survey show that 90 percent of respondents believe that the government should come up with new ways to reduce the harm caused by smoking cigarettes.

“The results of this survey come at a crucial time when the Senate is deliberating on the Vaporized Nicotine Products Bill. We hope that our senators will listen to the voice of Filipino smokers and vapers when we call on them to pass the VNP bill to encourage smokers to switch to less harmful alternatives to cigarettes,” said Peter Paul Dator, president of Vapers PH, a vaping advocacy group in the country.

The Senate is deliberating on Senate Bill No. 2239, or the Vaporized Nicotine Products Regulation Act, which empowers the government to regulate the importation, manufacture, sale, packaging, distribution, use and consumption of vapor (e-cigarettes) and heated tobacco products (HTPs).

About a million former Filipino smokers have already switched to novel smoke-free products such as electronic cigarettes and HTPs which, according to several scientific studies, are less harmful than traditional cigarettes.  Studies show that it is the smoke from combustion that releases harmful substances to the body, and not nicotine, which is a food-grade substance.

The Senate bill promotes a balanced policy toward the proper regulation of novel consumer products, using internationally-accepted product standards to protect citizens from the hazards of unregulated and substandard vapor and heated tobacco products being sold in the market.

The House of Representatives earlier approved its own version of the measure—House Bill No. 9007 or the “Non-Combustible Nicotine Delivery Systems Regulation Act” which seeks to reflect a public health strategy based on the principle of tobacco harm reduction.

Results of the ACORN survey confirm the wide public support for tobacco harm reduction, or the public health strategy that supports the use of less harmful alternatives to combustible cigarettes such as e-cigarettes, HTPs and other smoke-free products.

“Majority have positive perception would consider switching to e-cigarettes and heated tobacco products, and would like to have greater access to accurate information about these products,” the ACORN study says.

It says 92 percent want greater access to health-related information backed up by scientific evidence, while 94 percent believe that these smoke-free alternatives should have health warnings which accurately describe the risks.

The study says a majority of the respondents would like to find out more about smoke-free products, with 72 percent in favor of health warnings on products which are different in cigarette packs and 66 percent supporting product promotions in shops and kiosks.

About 58 percent of respondents say information should be in posters and product placement in shops and kiosks, 52 percent agree that such data should be included in age-restricted websites and mobile applications, and 52 percent support print advertisements in publications with an adult-only readership.

About 71 percent of them say the products should be allowed to be sold online in age-restricted websites.

About 91 percent of the respondents agree that instead of increasing the minimum age, the government should focus on better enforcement of the current law to prevent youth usage.

About 88 percent believe that flavored smoke-free products should be allowed, as long as they are not marketed or sold to non-smokers or youth As many as 95 percent of e-cigarette and heated tobacco consumers, say that the ability to use flavored products, such as menthol is important in influencing their decision to try smoke-free alternatives such as e-cigarettes or heated tobacco products.

Results of the study show that 53 percent of e-cigarette and HTP users prefer menthol flavor, 19 percent stick to tobacco flavor, and 28 percent want other flavors in these vaporized nicotine products.