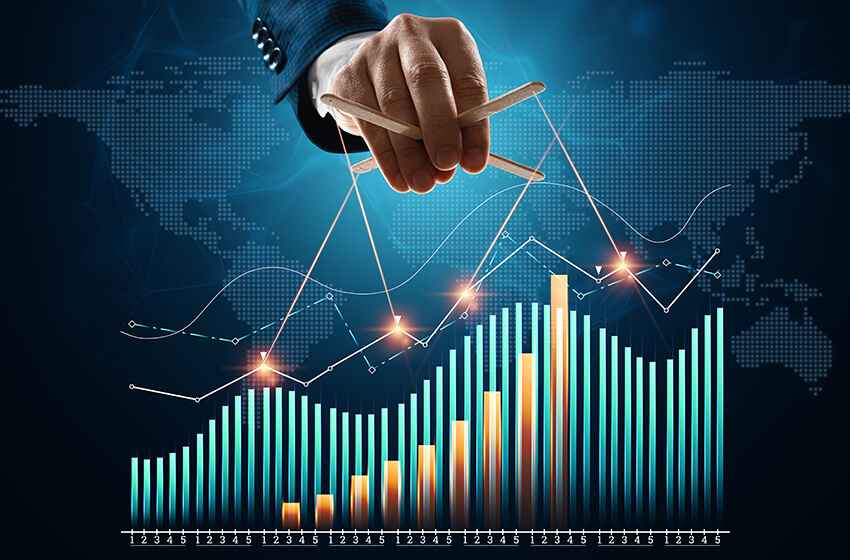 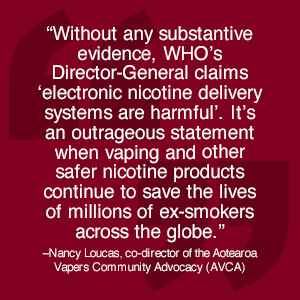 “Without any substantive evidence, WHO’s Director-General claims ‘electronic nicotine delivery systems are harmful’. It’s an outrageous statement when vaping and other safer nicotine products continue to save the lives of millions of ex-smokers across the globe,” says Nancy Loucas, Executive Coordinator of CAPHRA.

She says that rather than trying to ban the world’s most effective smoking cessation tools, the WHO should be promoting their availability to adults, and progressive risk-proportionate regulatory guidelines for countries to adopt.

“Not only does WHO wrongly claim vaping is harmful, but it warns it could act as a gateway to tobacco consumption. That claim also counters current evidence which proves vaping is an extremely effective off-ramp from smoking – not an on-ramp to smoking,” she says.

WHO’s eighth annual report says ‘threats posed by new nicotine and tobacco products’ need to be tackled. It claims ‘countries around the world are making progress in the fight against tobacco but some still need to address new products such as e-cigarettes.’

“WHO completely fails to comprehend that many countries seeing falling smoking rates are the same countries that have positively regulated the adult availability of safer nicotine products. They are not mutually exclusive.

“If you want fewer people to die from cigarette use, you make safer alternatives available. It’s that simple. Sadly, too much billionaire money is now tied up discrediting vaping for the WHO to recommend Tobacco Harm Reduction guidance that will actually save lives,” she says.

CAPHRA says the WHO’s public health approach to reducing the world’s 1.1 billion smokers, and eight million annual smoking-related deaths, not only continues to fail but its target has shifted for distraction purposes.

“Despite the WHO Framework Convention of Tobacco Control being drafted years before the arrival of vaping, the WHO increasingly wants to ban nicotine products across the board.

Nicotine is addictive but it’s not a killer, yet the WHO fails to differentiate between deadly combustible cigarettes and safer nicotine products. Signatory countries, and their millions of citizens desperate to quit smoking, deserve better,” she says.

CAPHRA notes that American billionaire Michael Bloomberg’s influence is now so profound that he even appears in the WHO’s 27 July media statement on its latest tobacco report. There he claims that tobacco companies’ goal is simple: ‘To hook another generation on nicotine. We can’t let this happen,’ says Bloomberg.

“Completely compromised reports like this only confirm the WHO’s reputation and relevance as a provider of global health advice has never been poorer. Over 100 million ex-smokers across the world now use safer nicotine products. The WHO should be pushing for many more, not demonizing them and their right to choose,” says Nancy Loucas.

Consumer groups in the Asia Pacific region have also launched a petition at change.org/v4v-petition that urges the World Health Organization to respect consumer rights and to stop demonizing Tobacco Harm Reduction options ahead of the next biennial meeting of the WHO Framework Convention of Tobacco Control (WHO FCTC) in November.